Skip to content
For your safety, we are seeing many patients via telehealth and in person as needed. For clinic updates and more information on COVID-19Learn More
Posted on November 1, 2017 by PDX ENT

How can EpiPens continue to be effective?

A new study from the University of California, San Diego found that expired auto-injectors can still be used in emergency situations. If you are one of the many people in Portland who suffers from a severe allergy, you know how frustrating it is to constantly throw away unused EpiPen, only to have to shell out the few hundred bucks to buy a new one. But it’s just something you have to do, as an auto-injector is the only thing that can save your life if you are having a severe allergic reaction known as anaphylaxis. 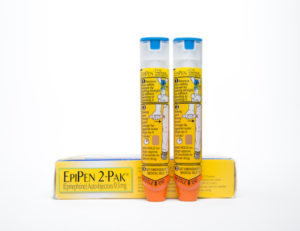 What Causes an Allergic Reaction?

When a threat is detected, the immune system responds by attacking the substances that are invading the body. Proteins designed to protect against foreign invaders, known as antibodies, are produced during this attack. These antibodies trigger the release of a chemical called histamines, which is responsible for these telltale symptoms of an allergic reaction:

The epinephrine, also known as adrenaline, is a hormone that helps relax muscles. Contained in an auto-injector, the epinephrine can open airways and reduce swelling if used during an allergic reaction.

The price of these life-saving auto-injectors has gone up 400 percent over the last 10 years. Because of this increase, researchers began looking into how long after the printed expiration date the injectors actually lasted.

The results of this study helped to validate a practice many patients have already been doing – saving their expired EpiPens. While the study in no way suggests that people should stop purchasing new auto-injectors when their old ones expire, it does advocate for holding onto the older injectors. They can be used in an emergency situation when a current injector is not available.

Simply put – in an emergency situation, an expired auto-injector is better than nothing at all.

For more information on the use of auto-injectors, contact your Portland ENT.